After looking at the definition, you can’t use the word utinni (it means “wow”) as I’m using it in my haiku, but c’mon, it fit so perfectly.

In Which I Recite 3 Happy Memories of Jawas

1.  Jawas always bring back one clear memory for me, and it was the first time I watched A New Hope. I had followed the story pretty well and nothing had surprised me because I had grown up with a vague knowledge of the plot and surroundings …that is, stormtroopers, Darth Vader, as well as Threepio and Artoo.

Yet when I saw that Jawa blast Artoo with his blaster and Artoo toppled down, I perked up. The movie suddenly went from interesting to gripping. Everything shifted. I expected Artoo and Threepio to have no problems going on their journey and finding Ben Kenobi. But something happened and the entire steady plotline altered. All because one mysterious being shouted, “Utinni!” and zapped Artoo.

2.  I went to my first convention ever in 2002, Celebration II. I had read about Celebration I in my Star Wars Insider and begged my dad to take me to Celebration II. The thing is – I didn’t even know what fan conventions were or cosplay or anything. I was 14 or 15 and that world was new to me. I remember driving towards the convention center and was angry at my dad because he said I could not wear my Jedi robe because I would be sorely out of place (it was his first convention too lol). As we waited in traffic, we looked out the window and there was someone in full Old Republic Jedi cosplay and it was the first cosplay I had seen in my life. I thought, “I want to be him,” and that started my 10 year obsession with getting an Old Republic Jedi Knight LFL-approved cosplay.

I had forgotten my camera, unfortunately, but the next day I brought it with me (and I totally wore my Jedi robe and brought my plastic lightsaber). And the very first picture I ever took at a convention was with a Jawa in cosplay. 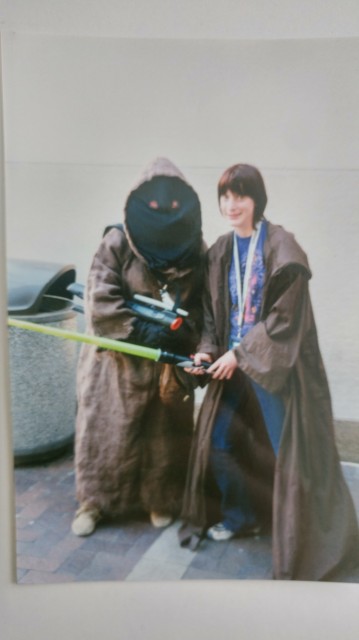 3.  My last happy memory is recently and also has to do with cosplay. While waiting for my friend in the cold lobby of a movie theater for The Last Jedi on opening night, there were people in Star Wars cosplay walking around. One of them was a Jawa and she was short, just like the Jawas in the film. She was true to form as well and would not speak Basic with me, only Jawaese. We had time to kill so I tried to talk to her about Star Wars. It was so much fun! It’s different from someone who doesn’t know your language, because in this instance, obviously she understood me, but I was trying to get her to crack and speak Basic. Nope, she was really good. It was like playing charades, honestly but a Star Wars charades (OMG – I should do this at my next Star Wars party!).

It was in this moment that I realized (probably for the 100th time) that Star Wars can really bring people together. I have no idea what this woman looked like, but she helped me kill time and ward off the frigid December weather by discussing-but-not-discussing Star Wars. While other people may see this as nerdy, I see it as love. Love for each other as fans and love for something that brought us together. I tip my hat to the lady Jawa who reminded me that though some fans can get divisive and heated over Star Wars nowadays, I think we still, at the core, all love each other.

If Jawas are your favorite species – give me a holler in the comments and tell me why!

Better late than never! Finally got our jack-o-lantern done for this Halloween season! 🎃👻🦇