I’m really proud of this picture I did. I picked it when I was working my way through the machete theory prior to TLJ and was learning and appreciating Anakin’s downfall so much more.

The reason I like this one so much is because I think I finally got the skin coloring and lips of Anakin to a somewhat normal point. If you look at my past Fan Art Fridays, you’ll notice that often times I completely mess up the skin tone and it comes out way different than what I originally meant. This time, I even remembered to put a dash of red in young Ani’s cheeks so that it gives him a rosy glow from the podracing. 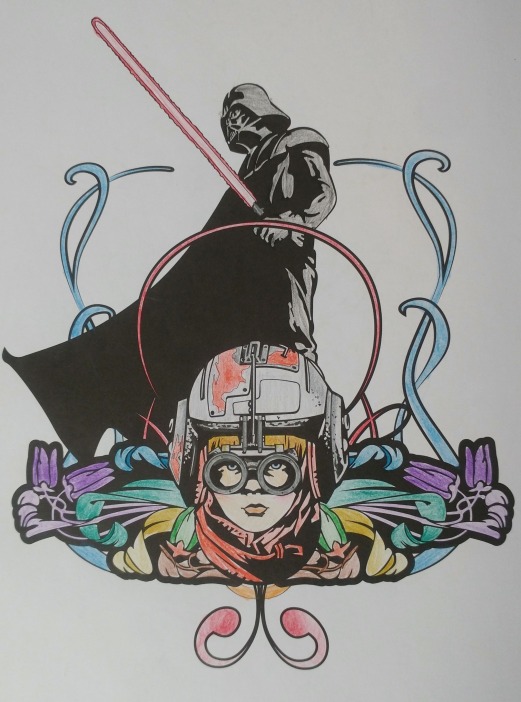 I always wonder what Qui-Gon sensed about Anakin. I feel like he had some kind of Force intuition about him…not just that his midi-chlorians were off the chart. Perhaps that cemented his intuition, but I wonder what he specifically felt. He knew he was the chosen one after bringing him before the Council, yet his feelings had to have been long-ranged. If Qui-Gon saw the shadow of Vader lurking in Anakin, would he have brought him back to Coruscant? Would he have made those bets on the podrace and tried so desperately to free Anakin?

This picture is so poignant because it shows us a stark dynamic between being a child and being adult, and worse, the difference between innocence and the extreme loss of it. We see Anakin when he’s podracing, possibly one of the most joyous moments of his life – doing something he loves and saving the day for his friends. The we see Vader bearing on top of him – filled with hate and anger, creating misery in his wake.

Around young Anakin, we also see life – plants and flowers billow around him. The contrast with Vader on top is empty. Even the blue vines/swirls don’t touch him. He is alone and without life.

I liked this picture and the story it was trying to tell.  I liked the way it made me think and reminded me of how things can go so wrong, so quickly.

Also, don’t forget to check out Mei-Mei’s version when you have a moment!