I am officially detoxing from The Force Awakens.  I watched some TV spot last week and decided in the middle of it that I was done until December 17, 2015 at 7:00pm Eastern Time.

So, sadly, if you are expecting any TFA speculations, happiness, and musings, you will have to wait until the movie is released.

I think what drove me to this point was the fact that we had been given so little footage and information for 2 years and the sudden onslaught of trailers, international trailer, and TV spots just made my hyperdrive break down.  Too much excitement all at once and I realized I just want to keep everything I’m thinking the way it is and not form any new opinions.  I’m in a happy limbo area right now.

But – happy one month anniversary!  TFA opens in exactly one month!  Prepare for the Star Wars world to be forever changed…for better or worse.

I went to Rhode Island Comic Con for the first time on November 7th.  The only reason I went was because Carrie Fisher was going to be hosting a big panel on Saturday.  That’s a no brainer – Carrie Fisher??  In New England??  I’m there in a heartbeat.  Mostly I was hoping that she’d be her normal kooky self and let something slip about TFA that she wasn’t supposed to.  Though I might not like the spoiler, it would be fun to say I was there when she said it.

And then…she bailed the day before.  Yup.  (This is starting to be a recurring theme with me.) Supposedly she got pneumonia and wasn’t allowed to fly.  Really?  Maybe.  Her tweet confirms this but it doesn’t sound very contrite.

BE CONTRITE CARRIE!  YOU JUST LET DOWN AT LEAST 10,000 FANS.  (RICC has around 17,000+ over two days, so that’s a good guess right? ) Supposedly she has agreed to sign up for 2016 because of this cancellation, but that won’t be as fun since TFA will have come and gone.

Once I stopped wallowing in self-pity, I took another look at the Friday panels…and realized nothing really interested me.  HA!  But, dammit, if I spend money on something, I’m going.  They did have interesting guests like folks from Sons of Anarchy (never seen it), Jason Momoa (hot, but no thanks), and Amy Jo Johnson (that would be a trip down memory lane that is no longer relevant) – but for me specifically, nothing super intriguing.

I ended up going to:

I never want to go to another panel that Daniel Logan is on until he either a) takes some drugs to calm down, or b) gets off the drugs that are making him crazy.

This happened at another Super MegaFest, too.  There was a panel with him and Jeremy Bulloch and he dominated the conversation.  I thought, “Well, okay, the kid is in his early 20s, so I’ll give him a break.  Maybe he’s just excited and/or nervous.”

But then I saw Jeremy Bulloch by himself a year later and realized how much I learned about Star Wars, Boba Fett, his work and life, George Lucas, and the industry without Logan constantly interrupting with a horrible joke or crazy statement.  It was fascinating and the kind of panel I love to go to.

So when I saw Logan two weekends ago, paired with Jeremy Bulloch and two other actors who had been under Fett’s helmet (Dicky Beer and John Morton), I realized that this craziness may just be Logan’s personality and I will have to skip panels with him in the future if I don’t want to be frustrated by his constant, annoying interruptions.  I would also like to say that this is not just me – I overheard some people in another line complaining about him.

To be a bit more positive, I did learn one interesting fact from him (I didn’t learn much from the others because they were barely allowed to talk): when he filmed the scene where Obi-Wan first confronts Jango Fett, he was having trouble making the correct facial expressions.  George would tell him, “Answer the door like you just saw something uncomfortable that you’re confused by,” and whenever Logan tried, George would just say, “No, that’s not it, try again.”  So Ewan McGregor told him, “Daniel, answer the door like I’ve just let off this horrible smelling fart.”  And apparently that did it.  HA!  I found that to be a cute story.

Behind the Masks and Uniforms

I wish we had more than an hour because with all the people on this panel since we basically got through 3 questions for each person.

I learned that Crowley (Madine) never grows a beard, but because the 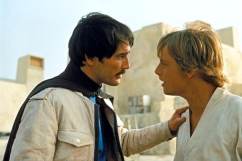 action figure was made prior to the casting of Madine, he was forced to grow a beard and he hated it.  Tim Rose (Ackbar) was excited to be back for The Force Awakens but wouldn’t say anything about it.  Apparently he heard rumors of Ackbar being back but never thought they would pick him since he’s so much older.  Hogan (Darklighter) was most disappointed that no one has seen his friendship scenes between him and Luke from the beginning of ANH because he said it lends more to the emotional friendship between the two characters.

If you look at the actual schedule, this panel is at the same time as a Q&A with David Prowse.  I decided to skip Prowse for this panel because I was completely misled by what I thought the Growing Up Geek panel would be about.  Thankfully, I did not have to be disappointed for long because I received a text informing me that Prowse childishly told everyone he was sick and lost his voice, so would not be doing the panel and only doing autographs.  I say “childishly” because Prowse has a reputation for being a little surly when it comes to Star Wars and likes to build up this “feud” he has with George Lucas.  All his mumblings and grumblings have gotten him banned from any official LFL convention/event.  I was interested in seeing him though, but was kind of happy that he backed out because I got to enjoy the Growing Up panel without the fear of missing out.

That said, the panel was completely unrelated to what I thought it was going to be, but I sat through it anyway since I had nothing else to do.

For me, the more Star Wars stuff, the better, when it comes to exhibit halls.  It’s also the prime place to spot some fun cosplay.  RICC’s exhibit hall was definitely spacious and there was something for everyone.  Lots of Star Wars Pop toys in so many exhibitor booths, but most Star Wars stuff focused on action figures, comics, autographed photos, and paintings.  No Star Wars stuff for the home, which is my favorite.

I did end up buying some tea from Tea & Absinthe though; they are always one of my favorites to see at a convention.  They make some cool looking Dr. Who tea for all the Whovians out there!

One of the best parts of the exhibit hall, and best marketing tactics, was done by Cox Communications.  They had a life size throne of swords/Iron Throne from Game of Thrones where you could take you picture on it for free.  The catch? In order to get the digital copy of it, you had to sign up for the newsletter.  No problemo for me.   I did my best Sean Bean expression as a Jedi.  What do you think? 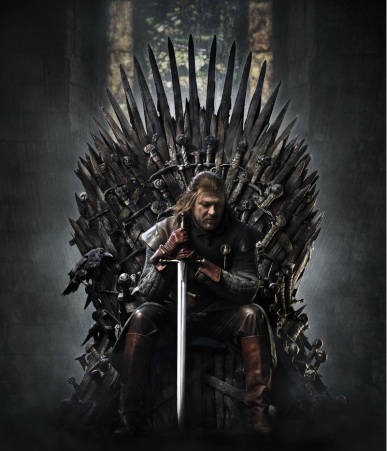 Would I go to RICC again (without Fisher)?  Probably.  I thought they did a great job with providing enough Star Wars panels to be worth the trek and convention pass.   It was a good mid-size con, but I was surprised that I did not see as much cosplay as I thought I would!  I was expecting a lot more but RICC seemed a little on the tame side for costumes.  There were definitely some cool ones, also some wonky ones, but overall – not as many as I’d thought there would be.

Here’s the agenda for those that are interested: http://www.ricomiccon.com/#!events/cfvg

Do you think there was anything I missed that I should have gone to instead?

A slideshow of the one day for you: